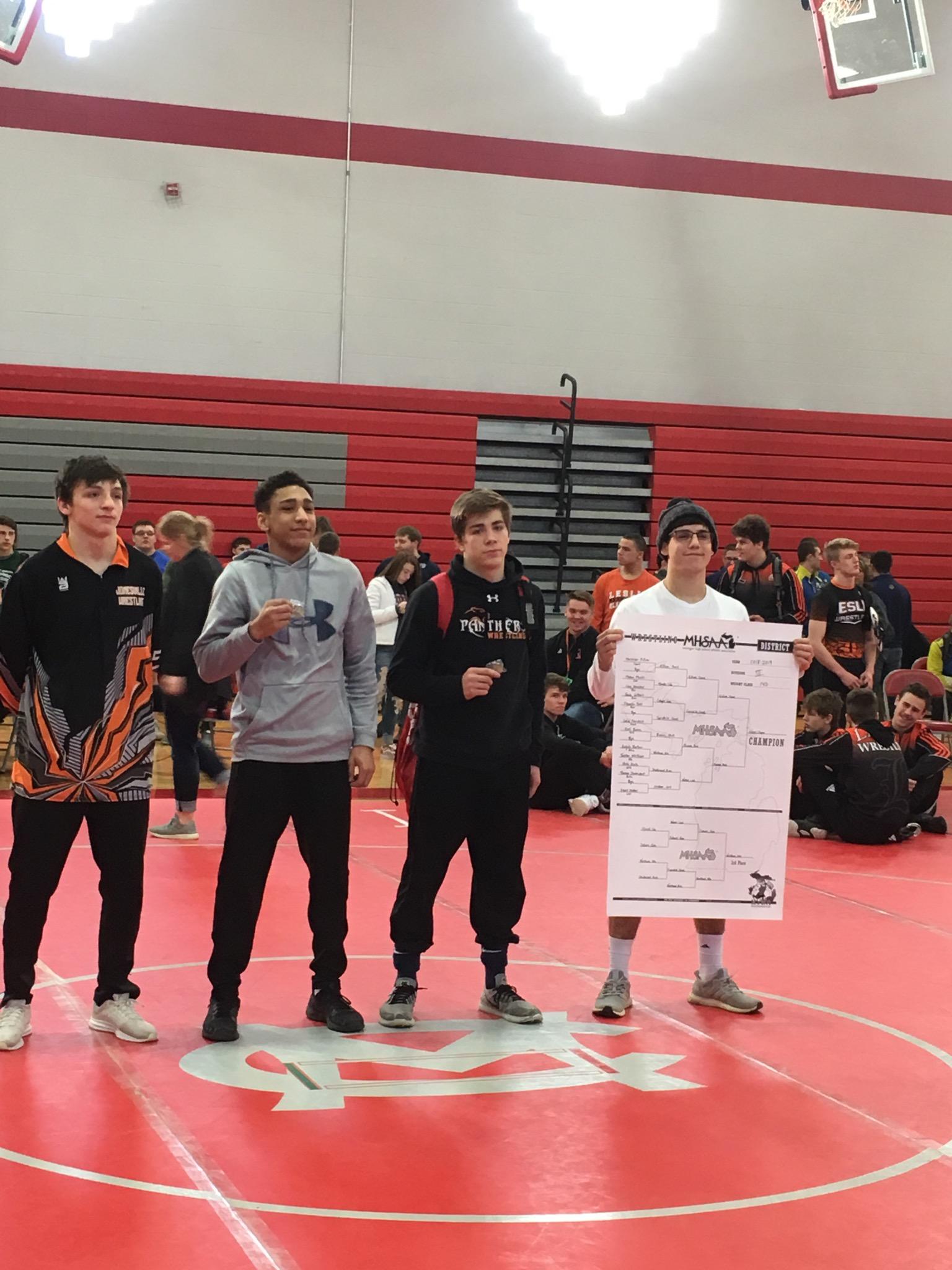 It is no secret in the Wrestling community that Stockbridge high school wrestles in one of the toughest districts in Division 3. With returning and ranked #1 State champion Dundee high school, Leslie High school, Onsted high school and Williamston high school, our districts consistently puts out the best wrestlers in the State.

Due to illness and injuries late in the season, Stockbridge took 6 wrestlers to Districts this year but only one made it out. Cody Freiermuth wrestled a tough match in the first round to Onsted returning regional placer Greg Denkins. It would be a close match but Onsted would get the take down late in the third to win the match. Kalysta Connolly would wrestle Gage Coulahan from Ida high school. This turned out to be a very exciting match to watch. Kalysta Connolly would put Gage Coulahan on his back late in the third period, but time would run out. Gage would win the match by points. Kevin killinger would see a full 16 man bracket at 160 pounds. Unfortunately he would draw Jared Woelmer from Ida high school, a two time State qualifier first round. Kevin came out tough and didnt give up. Woelmer would catch him late in the first period with a cradle and pin Kevin. Brandon Bell, first round would wrestle Thomas Kendziora of Onsted High school. Bell was at a severe height disadvantage to Thomas Kendziora of Onsted. Thomas would wrap up Bell in a body lock and pin him early in the first period.

Bradley Cooper would wrestle Christian Hollister of Jonesville High school first round and catches him in a headlock to pin him 1:44 seconds to advance to the 2nd round. In the 2nd round, Bradley would face the #1 seed and returning State placer Brock Kuhn of Michigan Center. Brad would put up a quick fight but Kuhn was able to put Cooper on his back and pin him early in the 1st period. Brad would have to face Jordan Versace of Michigan center in order to make it out of Districts. Jordan was able to catch Brad off guard and throw a headlock and pin Brad in the first period.

Kael Bunce comes into the tournament seeded 3rd at 140 pound weight class. First match, Bunce would face Trenton Wortham of Hillsdale High school. It would be a close match with the victory going to Bunce 4-1. Bunce would wrestle the 2nd seed, Gabe Weber of Leslie. Weber defeated Bunce last week in the league championship by a score 10-9. This was the rematch Bunce was waiting for and it wasnt close at all. Bunce would get the first take down and near fall points before catching Weber in a throw to his back and pinning him late in the 1st period. Bunce would advance to the Finals against the #1 ranked wrestler in the division 3, Christian Killion of Dundee high school. Bunce would lose 8-2, in a hard fought match. kael Bunce would be the only Stockbridge Wrestler to move onto regionals held at Williamston High School February 16th. The top four from there will move onto MHSAA State tournament at Ford Field March 2-4th