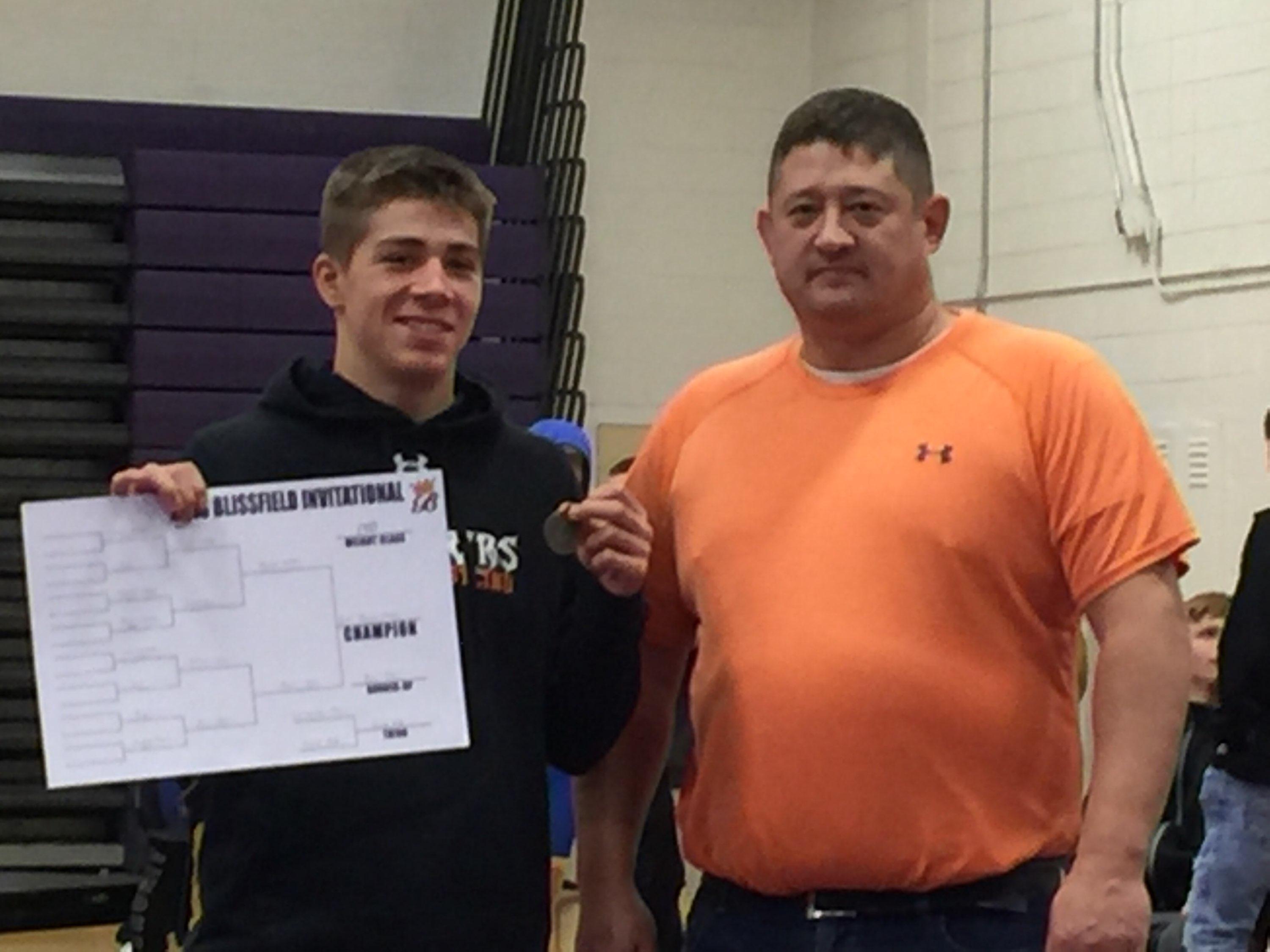 The Stockbridge Wrestling team enters the Blissfield Tournament with 11 wrestlers, out of 16 teams and brings home Hardware. This was the first in a long time that Stockbridge had more than 5 attend this 18 year old tournament.
We seen some tough competition and some tough teams enter this year. Stockbridge finished ahead of Hudson B team, Manchester, St Marys Catholic, Vandercook lake, Morenci and Anchor Bay. More importantly, I think the team got the first time Jitters out of the way. We made some mistakes but mistakes we can fix.
At 140 pounds Kael Bunce was the lone champion for Stockbridge. He Pinned Brandon Rau from Tecumseh in 3:08 seconds in the finals. Bunce was dominate on Saturday, Seeded 1st in the tournament. First round was a bye, Second round he defeated Evan Kemp of Airport 9-5. In the finals against Rau, Bunce never let him score. At the start of 2nd period, Bunce was up 13-0 before pinning Rau.
At 160 pounds Freshman Kevin Killinger Finished 6th in a full 16 bracket. First match he defeated 6th seed Matthew Richardson of Adrian with a Pin at 3:48 seconds. Second match Killinger was defeated by 3rd seed Austin Davis of Tecumseh 14-12. 3rd match Kevin defeated Kayla Shears of Vandercook lake with a pin at 1:46 seconds. 4th round Kevin would need to win in order to make it to the medal round. During intermission, his opponent made the mistake of pre judging Kevin. He told his coach and team mates he was going to Pin Kevin in the first period. During the 5th round, Kevin came out tough scoring the first points on Michael Smith of Hudson, a 4th seed at the tournament. 29 seconds in the 2nd period, Kevin would Pin Smith at 2:29 seconds to head to the medal round. 6th round Kevin would face Jordan Champlin of Airport, a Junior for 5th and 6th. It was a tough match but Champlin came on top with a score of 5-4. I couldnt be more proud Of Kevin, all of his matches were against upper classmen and hes never wrestled before!
At 285 Brad Cooper received a Bye first round before losing to 4th seed Connor Riddle of Vandercook lake. Copper would see fellow team mate Brandon Bell in the 4th round. Cooper would defeat him with a pin at 2:08 seconds. In the 5th round, Cooper would wrestle Freddy Martin of Jefferson and pin him at 1:35 seconds to advance to the medal round. In the finals for 5th and 6th place, Cooper would pin Matthew Bischoff of Blissfield at 1:28 seconds to take home 5th place.
Stockbridge Wrestling Team are heading to Maple valley Tournament next weekend December 15th. We should come away with some more medals next week. I think the guys that almost made the medal round are hungry to bring home some hardware.