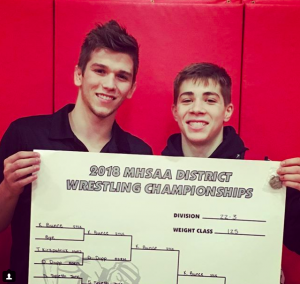 Three Grapplers took on the MHSAA District Tournament this weekend. The Panther line-up included Sophomore Kael Bunce at 125-pounds, Sophomore Cody Freiermuth at 135-pounds, and Senior Jake Sutton at 145-pounds. Sutton ended the day just shy of qualifying for the regional tournament after recording a pin in fifty-one seconds over Isaac Devore. Sutton ended the season with an 11-16 record. Cody Freiermuth entered his first tournament this Saturday where he lost a tight first-round match with Onsted’s Caleb Permoda. Freiermuth will be a key returner and have a significant impact on the team next season. Kael Bunce was able to punch his ticket to the Regional tournament after winning a loaded 125-pound bracket. Bunce entered the tournament ranked 10th in the state with a 20-0 record for the season. He was able to top 4th, 5th and 6th ranked in the state opponents to walk home with a district title and improve his record to 23-0. Bunce took out 6th ranked Daniel Jaworski from Dundee 12-1 in the championship match. Bunce will be moving onto the Regional Tournament at Williamston High School. The competition starts off at 9:00 a.m February 17th.